Let us start with the picture of light. After all, if I ask you what an apple is, most probably you will show me the picture of one if you don't want to give me one.

So the picture of the two mutually perpendicular "fields", actually is it a motion picture or a still photograph? 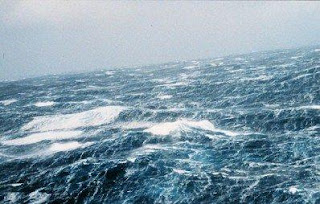 So you can see the wave? Yes, then it is only because you are familiar with the motion counterpart of it. What someone can really see is only the water. Let us look a little more closely.

So what do you see? No waves. That is it. A wave can be seen only in a motion picture. And what you call wave is an orderly motion of the water molecules. Note, here, though, the water is moving up and down, the wave is moving horizontally. The same effect you can get if you switch on and off light bulbs serially.
Now let us get back to light. So if it is a still picture what you should see is only the particle, yes one single particle. You have to get a motion picture to see the undulating motion. No particle travel in an undulating fashion unless acted by an external "force" and it is proved that light is not a particle(or more correctly, properties of light cannot be explained by assuming light as a particle. So light is not a particle.
Now let us consider "wave". So as I have already shown, water has to exist before it can move up and down to propagate a wave. So what is the sine wave pattern that is shown in the picture? They say it is a field. But field again is a dynamic concept, which denotes the area of influence. Fields don't oscillate. Again then what happened to the structure that moved away from each other once the wave passed. You know once the wave stops water surface go back to normal and water remain still. So what is the structure that has to remains still and get excited when the wave passes?
Is it always there, or is it produced just before the production of the wave?
If we assume it is produced at the time of production of light, there is a huge insurmountable problem, creation of a new object which violates the first rule of Physics that matter can never be created. Also, then it will be like a wire that is patterned like a sine wave. Just imagine a copper wire that is made to resemble that picture, can we call it a wave?
Then what is in that picture should always exist. But it is not the "aether", which is already debunked by the Michelson–Morley (MM) experiment.
So let us try to see what it might actually look like. There ought to be two lines and two should move in a mutually perpendicular direction(to explain the wave nature of light). So it will be like two monofilaments which run parallel. When a wave comes, it is propagated along it, the filaments will be moving away from each other and then fall back to the original position.
Then we have another problem. What prevents the two filaments from moving away from each other?
Let us look at the picture once again, after removing the unnecessary lines. 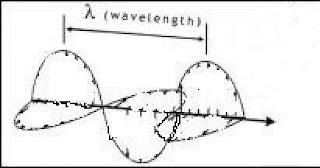 Now if we assume that the two filaments are intertwined, that will solve the problem of what prevents the filaments from moving away.
Now we are conceding almost all observations. There are two lines as drawn by most scientists. It has nodal points as is drawn. The filaments are electric and magnetic. But when we make out that the filaments are intertwined, the whole picture changes. It no longer consists of fields, but two intertwined filaments, which resemble a two twined thread, a rope.
So we have to assume that these threads exist between sun and earth, and when waves (impulses, like what happen when you twist a thread) pass through this thread and when the 'frequency' is in the visible range, we see it.
Now there is another problem, what happen when we light a match? Then we have to assume that there are threads between the match and our eyes. So by the same logic, if we can see anything, that means that all those things have threads attached to our eyes. So when we consider it, it becomes imperative that all atoms in this universe are connected to each other with these threads.
Then it explains another mechanism which scientists failed to explain till now - gravity. If these threads are connecting all atoms, gravity is also mediated by the same threads. (Remember the threads are there whether light passes through it or not.)
So with a single theory, we can explain both the nature of light and gravity. So why can't we accept the "rope hypothesis" and toss away all irrationality and nonsense like "dual nature of light", "space bending" to cause gravity and the like.....